The Southern Hemisphere’s largest electric vehicle (EV) fast charging network infrastructure provider, ChargeNet NZ, is delighted to have been recognised in its efforts to secure a low carbon future for New Zealand.

“We’re both humbled and delighted to have won this prestigious award,” says ChargeNet NZ CEO Steve West, “but even more important to us is the acknowledgement by the energy industry that reducing our carbon footprint isn’t just necessary, but urgent.”

“Governments around the world, including our own, are setting strict targets for reducing carbon emissions and introducing incentives to accelerate EV adoption for good reason – 20% of New Zealand’s carbon emissions come from transport, and increasing EV uptake will help to drastically offset this.”

In the time since ChargeNet NZ installed its first charger in October 2015, New Zealand has seen a dramatic increase in the amount of EV’s on the road, from less than one thousand to over 10,000 this month.

“When ChargeNet was founded it was done so with the primary goal of increasing the uptake of electric vehicles by providing a reliable, nationwide charging network,” added Mr West, “this was done to ensure that a carbon neutral future for New Zealand wasn’t just a dream, but something that is within reach in our lifetimes.”

The team credit their success not only to their collaborative instincts, clever technology, and resilience, but also to the enormous passion of New Zealand’s burgeoning EV community.

“We are just excited and passionate about the future for EVs in New Zealand. Every EV driver, whether they’re a customer of ours or not, has played a part in helping to move this country closer to being carbon neutral and energy independent” said Mr West.

“Over the last 12 months we’ve worked tirelessly to expand our network to ensure that we repay the faith that kiwi EV owners have place in us in helping get to them where they want to go – quickly, cheaply, and cleanly.” 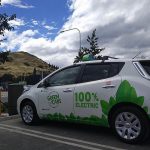