Through their partnership with ChargeNet, Aurora Energy is supporting the installation of public rapid electric vehicle chargers at key driving locations and the switch to electric, emission-free transport. In the four months since the two chargers were installed, they have delivered 5.18 megawatt hours of energy, via 733 charging sessions. Potentially saving as much as 6 tonnes of CO2 from being emitted into the atmosphere.

An official opening on Saturday, 3rd October at 4pm will celebrate the growing network of fast chargers that enables those driving electric vehicles to travel the length of the country with ease. The official opening is open to the public and will acknowledge the significance of the third Dunedin location – which is much needed given the city’s stellar ranking as the highest number of electric vehicles per head of population.

ChargeNet Chief Executive Steve West is thrilled with growth of the network in Dunedin and the establishment of the two Water Street fast chargers.

“We heard the people of Dunedin; they wanted more charging infrastructure, particularly in the inner-city, and we knew based on the incredible growth of the EV fleet in Dunedin it was time to grow our network in Dunedin.”

“New Zealand needs to see a rapid transition of the light passenger fleet to electric, and we know that starts with the availability of charging infrastructure to support it. With nearly 200 fast chargers nationwide and now three fast charging locations in Dunedin, the ChargeNet network is enabling that transition even faster,” Mr West says.

Mayor of Dunedin Aaron Hawkins says, “Dunedin is committed to climate action, with the Dunedin City Council setting an ambitious target for the city to be net Zero Carbon by 2030. We can’t achieve that without radically rethinking our transport network and increasing the capacity of our EV charging network is an essential part of this.”

“We have seen the uptake in EVs grow exponentially in Dunedin over the last few years and at Aurora Energy we have been planning for this growth to ensure we have the infrastructure to support electric vehicles now and into the future,” Mr Fletcher said. 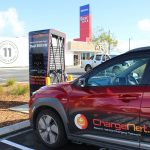 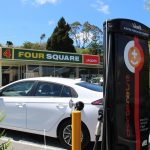